Linz (AT)The Linz Strassenbahn or tramway network today extends some 26.8km in the unusual gauge of 900 mm. The horse-tram era began in 1880 when a line was opened from the main railway station to the present day Hinsenkampplatz. In 1895 it was extended to the Mühlkreisbahnhof. In 1897 the trams were electrified. In 1968 the first articulated cars were ordered from the Lohnerwerken in Vienna, thereby introducing modernisation to the system. 1977 saw significant network expansion. In the north the new line from Sonnensteinstrasse to the university was opened. The next expansion was in the south; the city area of Auwiesen was served from 1985.
Read More 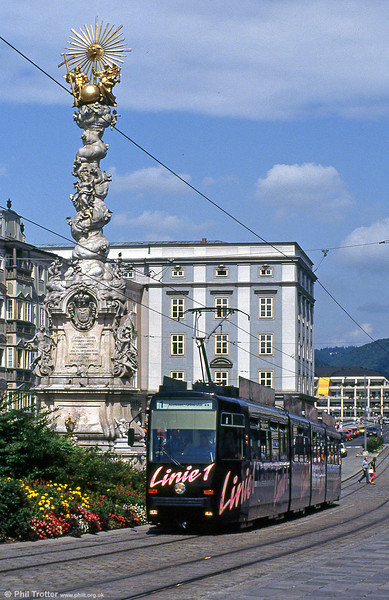 Car 51 at Hauptplatz on 12th August 1992. The 20 metre high Trinity Column, or Dreifaltigkeitssäule, was completed in 1723. The column is made of white marble from Salzburg. The column has three inscriptions which announce the dedication of the column to the Holy Trinity by the guilds, the Emperor and the people of Linz in gratitude for deliverance from the dangers of war, fire and plague.